Learn More about
our Chain by clicking
here 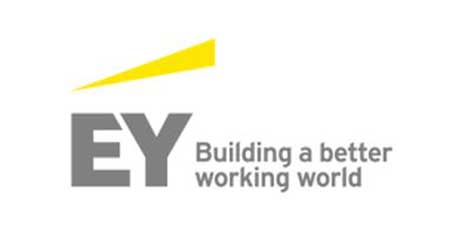 Young people in Greece are still “shipping-averse”, in that they continue to have a negative view, when it comes to seeking job opportunities in the country’s shipping companies, despite the fact that 58% of young Greeks have a positive view of the shipping industry and believe that it supports the Greek economy. In a recent study in young people between the ages 16 and 30, Ernst & Young Hellas determined that 44% state, it is highly unlikely that they would seek employment in the shipping industry at sea, while maritime academies are understaffed, underfunded and unable to follow recent developments. As such, Ernst & Young say that there is a clear need for more effective communication of developments in the shipping sector, as shipowners in Greece, are traditionally “allergic” to publicity and prefer to keep a low profile of their business activities.

Following are some of the researchers’ key findings:

Despite the high levels of unemployment in Greece, the majority of young people do not take a positive view of the prospect of employment in the shipping sector. This is the key finding of a survey by EY1, combining the results of telephone interviews of 1.000 young people aged 16-30 and of a series of in-depth interviews with executives from shipping companies and representatives of the academic community..

The prospect of employment at sea is less popular among women (15%), while for employment ashore the response among men and women is at comparable levels. Responses are not significantly differentiated among university graduates. Respondents from the Greek islands, which traditionally were a reservoir of manpower for the shipping sector, take a more positive view, although in these areas the attractiveness of the tourist industry is extremely high.

Asked about the features they consider important when looking for work, respondents mentioned: a pleasant environment (57%), job security (54%) and career prospects (50%). High earnings ranked fourth among the important criteria (45%). Based on the above, jobs in shipping, particularly at sea, ranked low among the options considered by respondents. Among those who said they did not wish to work in shipping, the most important deterrent was “long absence from home and family” (65%), while a large number of respondents said that they “don’t want to be locked up in a boat” (40%) or that these jobs “require expertise which they lack” (35%).

Interestingly, reluctance to seek employment in shipping coexists with high levels of recognition of the sector’s contribution to the national economy. 58% of respondents believe that the shipping sector contributes to the economy, which compares favorably to manufacturing, commerce, banking and the public sector, but lags behind the tourist sector. The majority of those interviewed also describe shipping as a dynamic sector (47%), a sector which commands respect (45%) and one that carries an important tradition (50%). However, respondents appear detached from the shipping sector, as only 16% say that “they feel close to shipping”, while only 24% believe that “shipping provides jobs to young people like myself”.

Commenting on the findings of the survey, Yannis Pierros, EY Transportation Leader for Central and Southeast Europe, stated: “At a time when our country is facing the huge challenge of unemployment, reconnecting youth with the Greek naval tradition is of vital importance. It is also critical that young people reposition themselves with regard to the present state of the shipping industry, and vice versa. It is clear that the Greek DNA contributes significantly to Greek excellence in the industry, so we need to give young people in Greece direction and perspective. Meanwhile, in view of recent technological developments and the growth of companies involved in the administration and management of the commercial fleet worldwide, attracting exceptional talent has become crucial for the viability of shipping companies. There is a substantial human capital in Greece which today is seeking its fortune abroad. This human capital could instead be seeking employment within the Greek shipping sector, which appears as the most dynamic, extrovert and internationally competitive sector of the Greek economy”.

The study by EY also brought to the fore the problems facing maritime academies. According to the feedback of representatives of the Academies of Merchant Marine and executives from shipping companies, while the level of candidates is constantly improving, the Academies are faced with pressing problems relating to staffing, infrastructure and financing, and are unable to respond to the needs of modern shipping. Curricula are prepared without the participation of the industry and have not been adapted to current reality and to changes brought about by technology. At a time when there is a global shortage of captains, engineers and electricians, and considering the Greek marine tradition, the Academies, given proper support, could compete with major schools abroad, attracting foreign students to Greece and providing important benefits to the national economy.

The study concludes with four sets of proposals which could help address these challenges:

Commenting on the study’s findings, Panos Papazoglou, EY Greece Managing Partner, said: “Greek shipping contributes significantly to the Greek economy and this contribution could be multiplied, if appropriate policies are adopted. The government, the shipping community, the Academies and all interested parties need to work together in order to reconnect Greek society with our country’s marine tradition and help young Greeks to fully leverage the opportunities presented by the shipping industry. EY, with its vast experience in the shipping sector, is committed to contributing with all possible means to this joint effort.” 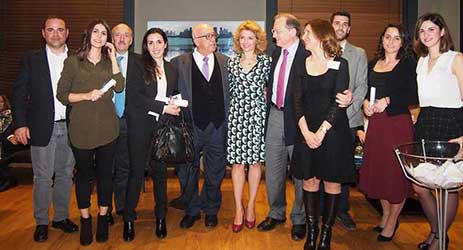 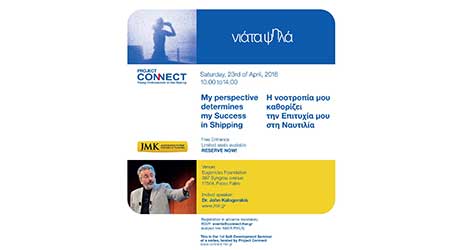 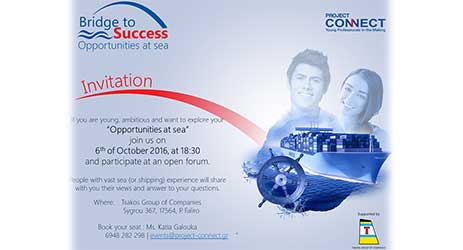 The First Opportunities at Sea – Bridge to Success