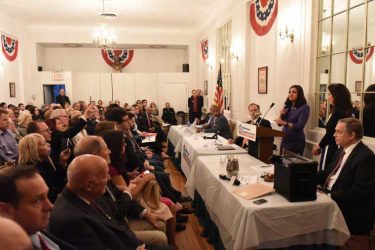 With the retirement of the great Paul Sarbanes and Olympia Snowe, there is not even a single Greek-American in the U.S Senate for the first time after many decades. And constituting 2 percent of the Senate was no trivial matter.

There is also no Greek-American governor, following Michael Dukakis, and also the late John Brademas, whose death left a void in general, as did the passing of U.S. Senator Paul Tsongas who, like Dukakis, was a presidential candidate.

Moreover, we once had great philhellene politicians such as Ben Rosenthal, Thomas Eagleton, Joe Biden, and others. Fortunately we still have a few, such as Bob Menendez and Carolyn Maloney.

Meanwhile, we also lost generous donors such as Michael Jaharis, George Paraskevaides, Andrew Athens, George Livanos, and Theodore Spyropoulos, and thus the erosion of the Greek-American community seems even greater.

And so, it generally seems that we are going through a prolonged period – which could be describe as the post-(Archbishop) Iakovos era – in which there is an absence of significant expatriate leaders both in politics as well as regarding our community’s issues.

However, despite the temporary void that has been created, there is no reason to be overcome by despair, because there is an array of several young politicians, such as John Sarbanes, Gus Bilirakis, Michael Gianaris, Aravella Simotas, Costa Constantinides, and Leonidas Raptakis, to mention the best-known, and others.

Assemblywoman Nicole Malliotakis, a Republican who represents parts of Staten Island and Brooklyn, has now been added to the list, after declaring her intention to run for mayor of New York City, provided that her friend and fellow Greek-American John Catsimatidis does not jump into the race. However, the billionaire has confided during various discussions that he does not intend to run for mayor at this point in time.

Therefore, if Malliotakis is able to secure the Republican nomination, and if she avoids taking an extreme stance on certain issues, such as immigration – which would not serve her well as a daughter of immigrants – then she can make it to City Hall, since Bill de Blasio is not considered a strong candidate, despite the millions of dollars that he has raised.

Regarding our community, and despite the obvious weaknesses in the church and elsewhere, the leadership of Andreas Dracopoulos, the co-President and Director of the Stavros Niarchos Foundation, creates conditions for a true revolution mainly, but not by any means exclusively, in the crucial sector of ​​our Greek-American education, the likes of which did not exist until today.

Thus, during a difficult time for Greeks, there are several signs that the emergence of new leaders in politics and in the community is far from over: On the contrary, one could say that the best is yet to come.